Marginality and Hospitality: Pim Verkleij on Aki Kaurismäkis ”The Other Side of Hope” 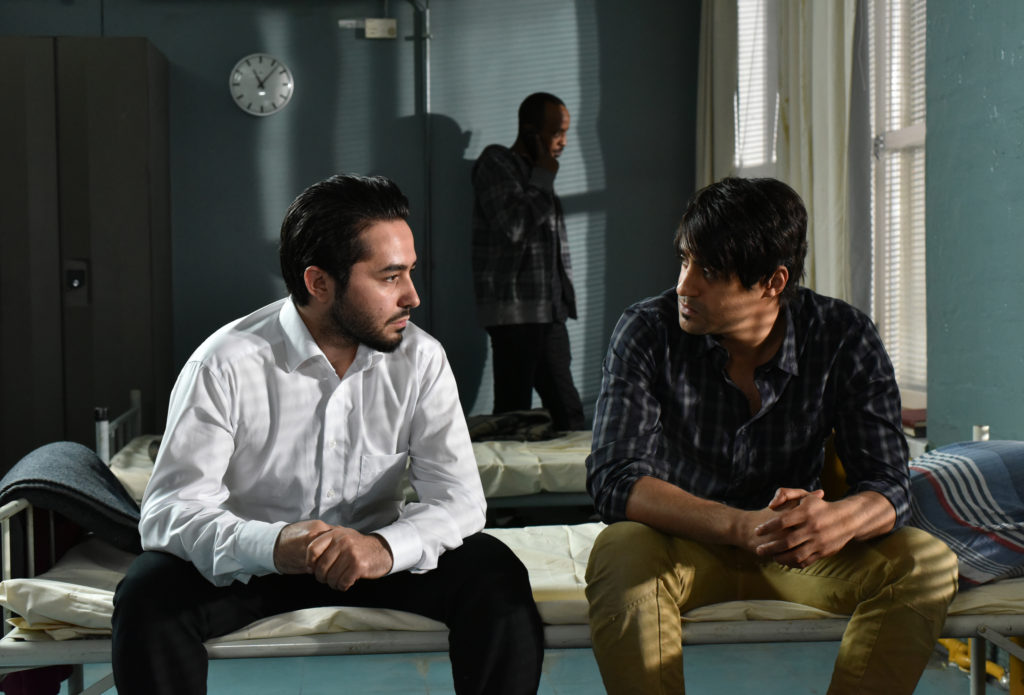 The Other Side of Hope’s (Toivon Tuolla Poulen) opening scene is a masterclass of economic storytelling in which Wikström (Sakari Kuosmanen) walks out on his alcoholic wife, without any immediate cause, needing not a single line of dialogue: he packs his suitcase, puts on a tie and solemnly hands his wife his wedding ring. She has devoted her evening to smoking and carelessly flings the ring in the ashtray in front of her, where it gets buried underneath a blanket of cigarette buts. A fat cactus sitting on the table quietly oversees it all but refrains from judging.

The second scene shows a coal freighter pulling in. Khaled (Sherwan Haji) crawls from underneath the cargo, all covered in soot. As he is a Syrian refugee, the first thing does is to locate the nearest police station. His asylum procedure is carried out in typical Kaurismäki fashion: even though it’s clear that this film is set in modern-day Helsinki, Khaled’s application is handled by a bunch of sullen bureaucrats who seem to single-handedly want to impede technological progress. Add to that a set design that screams “seventies”, accompanied by clearly oversaturated colours, and there should be no doubt that this is a film by Aki Kaurismäki.

By centring on the story of a refugee, the thematic of The Other Side of Hope is closely related to that of Le Havre, Kaurismäki’s previous film, which concerns a veteran shoeshine sheltering a young African migrant on the run from the police. As his new film is set in a Finnish context, it’s as if the archetypical Kaurismäki figure, the taciturn social outsider embodied by Wikström, finds its more politically updated version in Khaled. While The Other Side of Hope’s portrayal of the suffering of refugees is realistic, the film’s characters are, alas, more charitable than people in the real world. However, as this criticism is subtly incorporated into the storyline, it never feels forced. Moreover, Kaurismäki’s distinctive deadpan humour ensures that apart from being critical, The Other Side of Hope is also profoundly entertaining.

The humorous aspect comes especially well to the fore in a scene where Wikström acquires a restaurant called the Golden pint. Housed in a dilapidated building with crockery covered by thick layers of cobweb, it comes with a charming taste of emblematic Kaurismäkian characters: a cook who sleeps upright with a cigarette in his mouth, a gaunt waiter who still has to learn the word ”courtesy”, and an intern who only reluctantly stayed on. Wikstöm and Khaled meet when the latter decides to set up camp behind the garbage containers of the Golden Pint. Having exchanged their unconventional greetings (the two bop each other on the nose), Wikström decides to hire Khaled, offering him a sleeping-place as well as setting him up with a fake ID card—something which only in a Kaurismäki film could be the logical result of such an encounter. Apart from being an uplifting sequence, this is also a prime example of how the film criticises the current inhospitable sentiment towards refugees, by offering an alternative that is in direct opposition to it. Nevertheless, as the encounter between Wikström and Khaled seems entirely plausible within the film’s universe, it is up to the audience to relate it to the present.

In an interview with Sveriges Radio Sherwan Haji, the actor playing Khaled, ventures to make this connection: ‘‘In the role I’m embodying the pain of all these people. If refugees can recognise themselves in my character, that would mean much more to me than a positive reception of the film by any audience.’’ The question thus becomes: does Khaled, and by extension Kaurismäki, succeed in creating a credible representation of the hardships that refugees have to endure? As alluded to above, the short answer to that would be “no”. However, this is not at all because The Other Side of Hope ridicules their suffering. Instead, what the film does, with refined artistic and political sensibility, is to criticise the contemporary attitude of hostility towards refugees by offering a more promising alternative.