Crime a High Price to Pay for ”The Salesman”: Pim Verkleij on Asghar Farhadi’s New Film 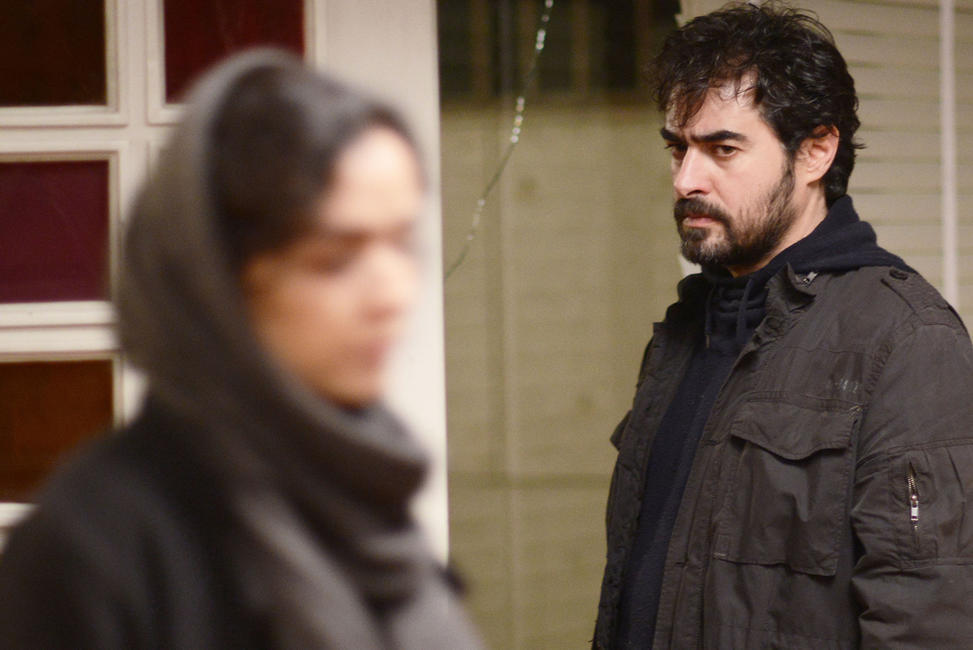 While furnishing their new apartment, Rana (Taraneh Alidoosti) is on the phone with her husband Emad (Shahab Hosseini), instructing him which groceries to get. She suspects he’s home when the bell rings, thus leaving the door of their apartment ajar. That the camera lingers on it slowly opening can only herald one thing: calamity. On Emad’s return, he detects a trail of blood spatters leading all the way to the apartment’s bathroom. It turns out that Rana has been molested by a customer of the former tenant, who is rumoured to have been a sex worker.

While the woman’s profession elucidates the perpetrator’s motive to visit the apartment, it remains unconvincing why Rana was so careless in opening the door at night, especially since she and Emad had only just moved in. This event, however, is of dramaturgical importance, as it lays the foundation for something that feels even more contrived: Emad’s search for the culprit. From the start, this has implausibility written all over it, as the perpetrator somehow manages to leave his car keys and telephone at the scene of the crime. In doing so, he provides Emad—who chooses to be his own private eye as he believes judicial procedures to be too time-consuming—with the perfect starting point for his quest. Conveniently, the culprit parked his car in the neighbourhood so it doesn’t take Emad long to locate it. This is where the plot becomes even more farfetched, as Emad wouldn’t have been able to uncover the identity of the perpetrator by himself if it weren’t for that the father of one of his students works in the motor vehicle licensing department. A rather poor solution to swiftly bring his quest to a close. Combined with the fact that this whodunit hinges on the culprit leaving his keys behind in the first place, the entire episode becomes, at most, a mediocre thriller.

What’s worse is that because of its implausibility, this part detracts from The Salesman’s positive qualities. These are present from the opening scene, in which Emad and Rana’s former place of residence is collapsing. The chaos following this incident is skilfully juxtaposed with the calmness of the title sequence, in which we’re introduced to the theatre that will be the setting for an Iranian interpretation of Arthur Miller’s Death of a Salesman. The idea the building is collapsing as a result of an earthquake—something one would expect given the panic amongst the residents—is subtly invalidated when the camera slowly tracks towards a cracking window, through which we see an excavator digging away at its foundations. When read allegorically, this scene masterfully encompasses two notions that can be seen to be at the heart of The Salesman: the deterioration of Emad and Rana’s marriage following the misdemeanour and the film’s critical message of Iranian society. The cracks in the window could thus be interpreted as foreshadowing the cracks that develop in the main characters’ relationship, while the excavator becomes a criticism of the instability of life in modern-day Iran, as it quite literally causes the ground to vibrate.

That the criticism of this instability is especially relevant for Iranian women is stressed in a scene where a woman sitting next to Emad in a taxi request to change seats as she feels uncomfortable sitting next to a man, most likely because she has been assaulted by one before. In a subsequent scene, during the rehearsal of Death of a Salesman, a male actor ridicules his female co-actor because she plays a prostitute. In relating both scenes to the offence committed against Rana, a pattern emerges: the film’s critique of the aggressive male of Iranian patriarchal society. This culminates during the climax of the film. At this point, it has become clear that the culprit is an elderly man by the name of Naser (Farid Sajjadi Hosseini). He confesses to Emad that temptation led him to molest Rana—under the pretext of ‘‘one woman is as good as another’’—even though he realised that the previous tenant wasn’t there. In order to get his revenge, Emad has arranged for Naser’s family to be present so that he can personally confront them with Naser’s deed. When the family arrives, however, Emad doesn’t have the guts to go through with it as the family bond seems too strong. To make matters worse, Rana tells him that if he does, she will leave him. Thus, Naser gets away with his crime. This is where the film’s two parallel stories ephemerally merge in their critique of the unassailable role of the Iranian male.

Despite this brief moment of convergence, The Salesman’s main problem is that for the largest part of the film, the whodunit and the its critical part exist alongside one another. While in a temporal dimension, the film does alternate between the two story lines, on the level of content they don’t coincide until the final scene. Given its implausibility, the thriller aspect not only distracts from the film’s critical message, but it also feels like an unnecessary attempt to dramatize a film that could have well done without it. As such, The Salesman, which received the Oscar for best foreign language film as well as the price for best screenplay at Cannes, fails to become a coherent whole, which is a shame given the potential of its scenes critical of Iranian patriarchal society.